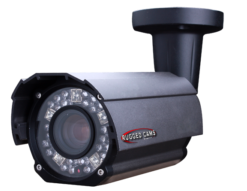 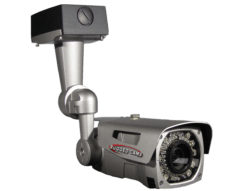 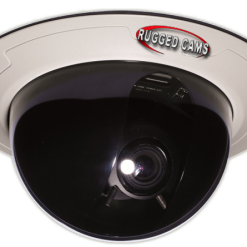 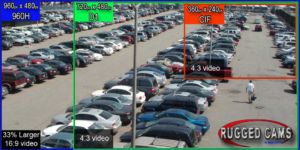 Rugged Cams is now updating all of their Analog DVR's to support the new 960H Technology. Why? Because it is the single biggest advance in analog technology in decades, and is now approaching Megapixel resolution. Truly stunning!

For years, analog technology has been stuck at 720×480 as the highest resolution achievable. Many DVR's still can't record at that size “real time” (30 fps/channel). This, many in the industry believed, was as good as analog was ever going to get. It wasn't bad. In fact, it looked pretty darn good, but it was a long way from megapixel resolutions. Many users wanted more, and the only way to get there was Megapixel cameras (IP or HD-SDI). For this reason, most people thought that analog was dying a slow death.

Then SONY (and also another company almost simultaneously), came along and improved Analog so much, that the picture format had to change from the standard 4:3 ratio (SD), to the better 16:9 format that HD uses.

SONY figured out a way to capture much more resolution, and in doing so, almost touched 1000 pixels wide – which is where most Megapixel cameras begin. Truly a game changer, and the technology is sure to extend the life of analog for many more years to come. In fact, SONY is discussing that they know a way to bring analog into the megapixel range, perhaps even 720p, within a couple of years. However, they may have stretched the analog CCD camera sensors as far as they can go, so the next jump will likely be forced to use CMOS sensors.

CMOS is what most IP cameras and HD-SDI Megapixel cameras use to reach ultra-high resolutions. However, CMOS cameras have not advanced enough to be able to deal with darkness as well as analog does. It is a known fact that if you need to see well in dark conditions, analog cameras can give you a better picture than CMOS cameras, which tend to devolve into “black noise”. Analog cameras can deal with dark conditions much better, but that may not always be the case. Scientists are working to improve CMOS sensors, but any advances have only been incremental so far.

The real beauty of 960H technology, is the fact that most of the monitors used for DVR's these days are 16:9 format monitors (4:3 monitors are harder to find, and are also more expensive as well). When you view regular analog DVR's on this monitor, it is probably stretching the picture to fit the screen. This can result in distorted pictures and certainly misrepresents the scale of objects and people, and also distances, especially from left to right in the picture, because of the stretching. Now your resulting Live images and recorded footage will be correctly displayed on your monitor.

The 960H DVR's from Rugged Cams are completely backwards compatible with all previous DVR Recording formats and all previous cameras, no matter the resolution. In other words, if you have an old camera that is only 600 lines (or less), you can simply choose to record at D1 or smaller. Any camera can be recorded at any resolution with these new DVR's.

You'll need two things: a 960H compatible camera, and a 960H DVR. All of your existing cameras will work with these new DVR's. All of the recording resolutions of the past are still available to you. This new technology doesn't make any of your cameras obsolete. Simply use what you already have, and add new 960H capable cameras when you want or need to. It's that simple.

The Same Lens Sees MUCH Wider Now Than Ever Before